805,000 electric cars criss-cross our roads
In 2010, we could count only 980 electric vehicles. Twelve years later, there are close to 805 000 criss-crossing our French roads, cities and villages. In a few years, the electric and rechargeable hybrid vehicles have imposed themselves in the automobile market. Their environmental qualities are not their only assets. Economic, reliable, pleasant and quiet, the electric car offers numerous advantages, which explain the surge in sales in the last 10 years.
What are the electric car’s advantages, then?
DRIVECO answers your questions and presents 5 good reasons for why it’s your turn to get started with electric!

Argument n°1 for buying an electric car: its CO2 emissions. Indeed, when it rolls, the latter does not emit any CO2 and releases very few pollutants in the air (generated by the tyres and the brakes). Its impact on the environment is therefore much less important than of the thermic modeles.

Switching to an electric vehicle also causes a change in the air quality of the cities and in the proximity of roads. Especially if the majority of the population switches to green mobility !

Certain questions persist over the CO2 emissions…and they are legitimate !

True, the car does not emit CO2 , but what about the generation of electricity used for charging ? Is it green energy ? And what are the CO2 emissions generated during the manufacturing of an EV ?

According to numerous studies, notably those led by Carbone 4 (climate strategy consulting firm), we have noticed that even if the cars are charged with an energy mix dominated by carbon, as in Australia or Poland, their total CO2 emissions remain inferior to those of thermic cars ! Although, there are exceptions : Carbone 4 has listed twenty territories where the electric car is less virtuous than the thermic car, notably in the French overseas departments, India, certain African and Middle Eastern countries and others such as Cuba, Haiti or Indonesia.

As for the manufacturing of an electric car, it can be more carbonized than that of a thermic model. However, starting after two or three years of usage, the total carbon footprint is reversed and it becomes much better than that of the thermic car.

Overall, the impact of electric vehicles on the environment and public health is significantly inferior to that of thermic vehicles.
At DRIVECO, in order to offer decarbonized electricity, we have installed 100% solar stations and thus make electric mobility completely green. Due to this type of charging, the carbon footprint of your car becomes very small.

In the city, owning a clean vehicle makes your trips easier !

In fact, while the thermic car is impacted by the alternate circulation put in place in the fight against pollution, the EVs are not affected.

Also, in the Paris region and in other French cities, electric cars have access to free parking reserved for them.

In the French capital, since 20 November 2020, the electric scooters have the chance of being allowed to run on the bus lanes with the same rights as the taxis. Which is much faster than the majority of Parisians !

Besides, the option of giving access to the same lanes to electric cars is being considered. The future will tell !

The electric car is economical to use ! 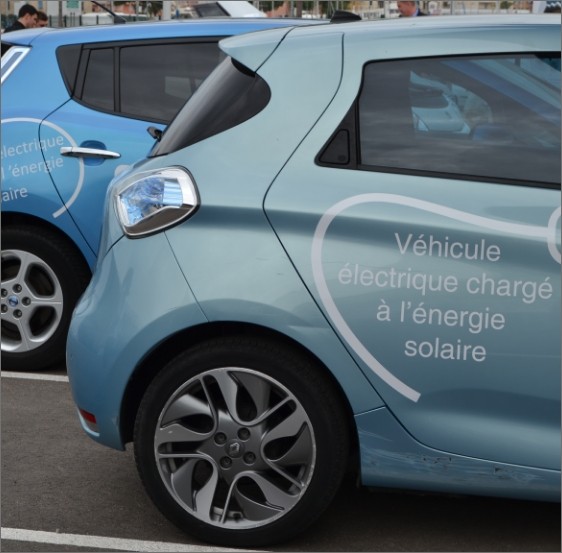 While the electric car is more expensive to buy than its thermic equivalent, a few years of usage are enough to reverse the balance.
In fact, according to a study conducted by l’UFC-Que Choisir in June 2021, the purchase of an electric car has a fast payoff, both for light or heavy driving.

If you want to buy an EV, know that the French government has put in place many types of help to support your green transition : ecological bonus, conversion premium and premium for local communities. These types of help can reach 6000€ each. There are other premiums available to facilitate the installation of charging stations at home or in public spaces (ADVENIR).

In addition to government support, the cost of energy allows driving the car on average 73% cheaper than the cost of fuels used by a thermic car. This trend varies depending on geopolitical events, as they impact the cost of raw materials.

The maintenance is also cheaper and less constraining than that of a thermic model. In fact, the mechanics of electric vehicles is much simpler : they contain fewer parts. For example, they don’t have a gearbox. Also, the replacements and repairs are less frequent. There are only three fluids that need regular replacement: the brake fluid, the coolant and the windshield washer fluid.
Lastly, the auto insurance is cheaper for electric vehicles (jusqu’à -50%). Why ? The insurers tend to favor “clean” vehicles. Especially since they are more reliable (fweres breakdowns).

In fact, regarding reliability, the electric car does not stop improving ! The capacity of batteries is clearly improving. Manufacturers promise a more autonomous battery in future years. Batteries with an autonomy of 1000 km might be available by 2021, according to the manufacturer Envision AESC Group.

The electric car has the advantage of being quiet. It also offers a new driving experience. In fact, because it does not have a gearbox, the car does not vibrate and it’s very enjoyable to drive.
A calm atmosphere dominates the interior, which makes driving an EV less tiring. In fact, the grabox does not exist. This allows the driver to reduce part of her or his attention dedicated to handling the engine.

Today, it is very easy to find charging points close to you. They can be present on the road or are managed by the local communities or municipalities. It is also possible to find them in the parkings of big retailers, cinemas, hotels, car dealerships, etc.

From 8600 in 2014 to 56 000 in February 2022*, the number of charging points in France has grown strongly in the last years. And for good reason ! The Mobility Orientation Law (LOM) mandates that the owners of parkings open and closed to the public to install them from now to January 2025**.

Comfortable, accessible, easy, reliable, economical and ecological, the electric car does not stop proving its legitimacy compared to the thermic models.

Now you know all the advantages of an electric car ! If you would like to know more, do not hesitate to consult our other chronicles on electric mobility, the energy transition and sustainable development !

**Obligation applies only to parkings of non-residential buildings with over 20 parking spaces, open or not to the public. 5% of parking spaces must therefore be reserved for electric charging. CP : Simplify your electric charging with the new DRIVECO app Keep in touch
Register for our newsletter

Keep in touch
Register for our newsletter